"Morris Langlo West" Officer of the Order of Australia/AO was an Australian novelist and playwright, best known for his novels The Devil's Advocate (West novel)/The Devil's Advocate (1959), The Shoes of the Fisherman (novel)/The Shoes of the Fisherman (1963) and The Clowns of God (1981). His books were published in 27 languages and sold more than 60 million copies worldwide. Each new book he wrote after he became an established writer sold more than one million copies.

West's works were often focused on international politics and the role of the Roman Catholic Church in international affairs. One of his best known works, The Shoes of the Fisherman (1963), described the election and career of a Slav as Pope, 15 years before the historic election of Karol Wojty?a as Pope John Paul II. The sequel, The Clowns of God, described a successor Pope, who resigned the papacy to live in seclusion.

If you enjoy these quotes, be sure to check out other famous writers! More Morris West on Wikipedia.

Once you accept the existence of God-however you define him, however you explain your relationship to him-then you are caught forever with his presence in the center of all things.

You are also caught with the fact that man is a creature who walks in two worlds and traces upon the walls of his cave the wonders and the nightmare experiences of his spiritual pilgrimage. 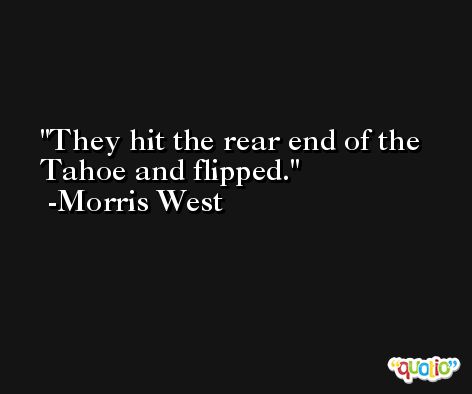 They got out of the car and took off into the Royal Palm Village area (a mobile home community) where they stole a four-wheeler.

[Among them was Police Chief Morris West, who was a detective when Horner was killed. Two of the named suspects in the case, Robert Winston and the man accused of shooting Horner, Charles Fowler, are West's cousins.] You can choose your neighbors, but you can't choose your family, ... It's sad.