"Philip Michael Jeffery" is a retired senior Australian Army officer who was the List of Governors-General of Australia/24th Governor-General of Australia, serving from 2003 to 2008, and the 30th Governor of Western Australia, serving from 1993 to 2000. From Perth, he graduated from the Royal Military College, Duntroon, and served in the Military history of Australia during the Malayan Emergency/Malayan Emergency and the Military history of Australia during the Vietnam War/Vietnam War, being awarded the Military Cross during the latter conflict. Jeffery was at various stages commander of the Special Air Service Regiment and the 1st Division (Australia)/1st Division, and subsequently Deputy Chief of Army (Australia)/Deputy Chief of General Staff, before retiring from active service in 1993. Having previously served in the equivalent Governors of the Australian states/viceregal role in Western Australia, Jeffery was appointed governor-general in 2003, following the resignation of Peter Hollingworth. The first career Australian Army officer to hold the position, he was succeeded by Quentin Bryce.

If you enjoy these quotes, be sure to check out other famous politicians! More Michael Jeffery on Wikipedia.

The government is committed to deepening ties with North Asia -- building on mature links with Japan, expanding ties with China and continuing support for peaceful outcomes on the Korean Peninsula.

Collectively, we must do more than simply watch, with resignation and a feeling of powerlessness, reports on the evening news about the latest terrorist atrocity. 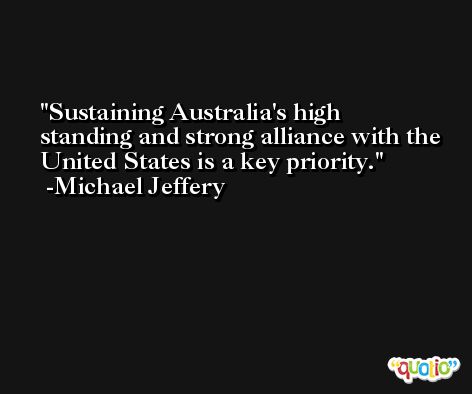 For us Australians, Singapore also represents sacred soil. Almost 2000 Australians died here in the defense of your island country and our neighborhood.