While living in the United Kingdom from 1978 to 2000, Ignatieff became well known as a television and radio broadcaster and as an editorial columnist for The Observer. His documentary series Blood and Belonging: Journeys into the New Nationalism aired on British Broadcasting Corporation/BBC in 1993, and won a Canadian Gemini Award. His book of the same name, based on the series, won the Gordon Montador Award for Best Canadian Book on Social Issues and the University of Toronto's Lionel Gelber Prize. His memoir, The Russian Album, won Canada's Governor General's Literary Award and the British Royal Society of Literature's Heinemann Prize in 1988. His novel, Scar Tissue, was short-listed for the Booker Prize in 1994. In 2000, he delivered the Massey Lectures, entitled The Rights Revolution, which was released in print later that year.

If you enjoy these quotes, be sure to check out other famous politicians! More Michael Ignatieff on Wikipedia.

I don't think you'll have to wait long. I'm not in a Hamlet-like state of indecision.

You can't spend your whole life teaching people about public service without finally thinking that you should put your money where your mouth is. 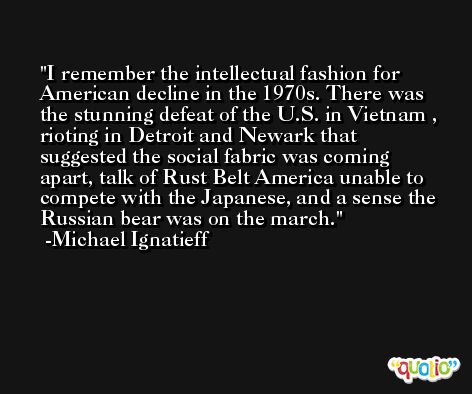 I am fighting to revive faith, not just in the Liberal party, but in politics itself. I'm a devoted Liberal, I've been one all my life. That's why I'm in the fight to renew the party I love. All my life has been inspired by Canada, and now it's my turn to try and inspire my fellow Canadians.

I'd be wary of writing this country off. There are some scary and ugly things about it, but it remains a turbulently, explosively innovative place. 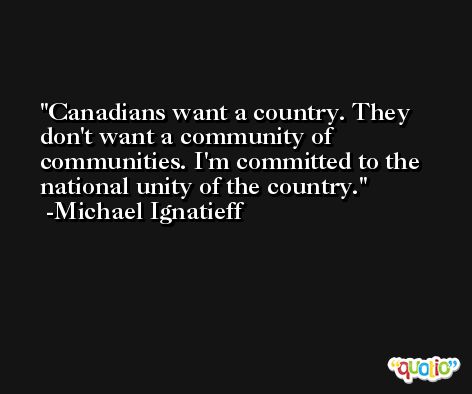 I spent five years in the United States. I admire and respect American institutions.

None of us, none of us are going to run against each other. All of us are running against Stephen Harper's vision of Canada.