"Maureen Moore" is an American actress. Debuting on Broadway theatre/Broadway in 1974's revival of Gypsy (musical)/Gypsy as Dainty June, Moore has had a long career on stage (also appearing in some films and television). Although she has been cast in a number of major Broadway roles, Moore has notably carved out a niche as standby for the biggest stars on Broadway in such demanding starring roles as Edie/Edith in Grey Gardens (for Christine Ebersole), Mama Rose in Gypsy (for Bernadette Peters) and Norma Desmond in Sunset Boulevard (musical)/Sunset Boulevard (for Elaine Paige).

The decision by the unions is unfortunate, but it clearly underlines the need for a level playing field. This affirms the need for a ban on smoking in all public places.

I wanted to get in contact with these two speakers so students could be exposed to another side of the story. 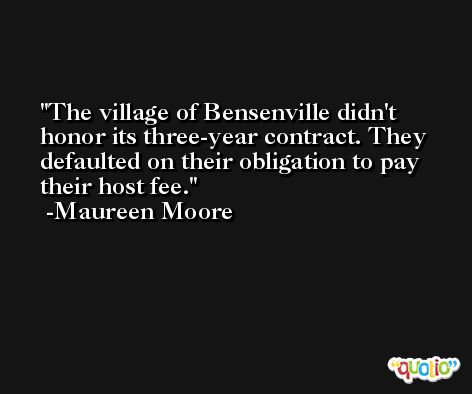 A lot (of Chautauquas) are lost because they didn't have a building. ... If that building weren't here, we wouldn't even know about (Chautauqua).