"Mark Anthony Wheeler" is a former American football defensive tackle who played eight seasons in the National Football League for the Tampa Bay Buccaneers, New England Patriots, and the Philadelphia Eagles. He started in Super Bowl XXXI for the Patriots. Wheeler played college football at Texas A&M University and was NFL Draft/drafted in the third round of the 1992 NFL Draft.

We have a bunch of excellent athletes and I have high hopes for the boys.

There is no reason that any voice application will not be able to run on a Symbol device once all companies move to the standard Windows platform. From an equipment standpoint, there is audio capability in nearly all handhelds. They all can run voice or text-to-speech applications. 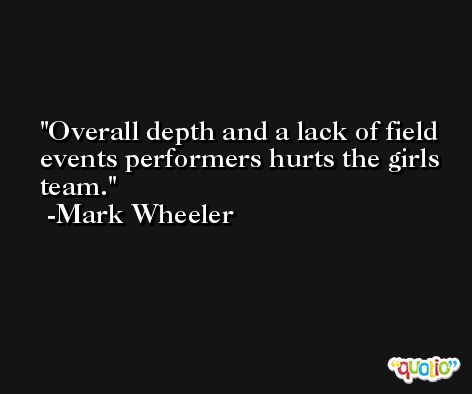 They had no answer for him.

Our desire is to consolidate the market as well so we'd be interested in what their view is. Anything could happen.