"Marcel Duchamp" was a French, naturalized American painter, sculptor, chess player, and writer whose work is associated with Dadaism and conceptual art, although careful about his use of the term Dada and direct association with Dada groups. Duchamp is commonly regarded, along with Pablo Picasso and Henri Matisse, as one of the three artists who helped to define the revolutionary developments in the plastic arts in the opening decades of the twentieth century, responsible for significant developments in painting and sculpture. Duchamp has had an immense impact on twentieth-century and twenty first-century art. By World War I, he had rejected the work of many of his fellow artists (like Henri Matisse) as "retinal" art, intended only to please the eye. Instead, Duchamp wanted to put art back in the service of the mind.

I am interested in ideas, not merely in visual products.

Chess can be described as the movement of pieces eating one another. 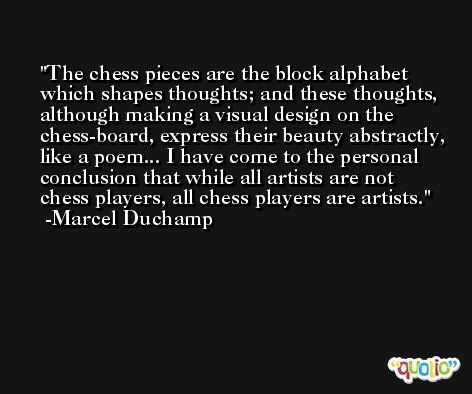 The individual, man as a man, man as a brain, if you like, interests me more than what he makes, because I've noticed that most artists only repeat themselves.

I have forced myself to contradict myself in order to avoid conforming to my own taste. 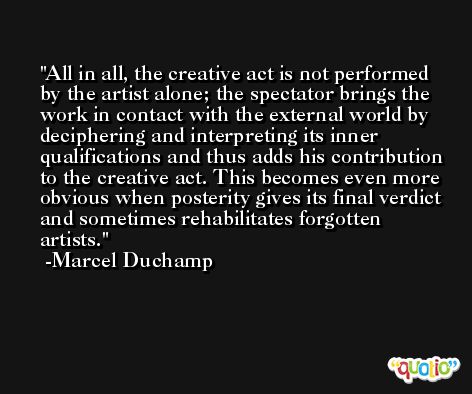 I am still a victim of chess. It has all the beauty of art -- and much more. It cannot be commercialized. Chess is much purer than art in its social position.