She recorded her first albums in 1978 and 1980 in a traditional country and blues style and received very little attention from radio, the media, or the public. In 1988, she released her self-titled album, Lucinda Williams (album)/Lucinda Williams. This release featured "Passionate Kisses", a song later recorded by Mary Chapin Carpenter, which garnered Williams her first Grammy Award for Best Country Song in 1994.

Known for working slowly, Williams recorded and released only one other album in the next several years (Sweet Old World in 1992) before her greatest success came in 1998 with Car Wheels on a Gravel Road, an album presenting a broader scope of songs that fused Rock music/rock, Blues music/blues, Country music/country, and Americana music/Americana into a more distinctive style that still managed to remain consistent and commercial in sound. It went gold and earned Williams another Grammy while being universally acclaimed by critics. Since Car Wheels on a Gravel Road, she has released a string of albums that have also been critically acclaimed, though none has sold in the numbers of her 1998 breakthrough. She was also named "America's best songwriter" by Time (magazine)/TIME magazine in 2002.

If you enjoy these quotes, be sure to check out other famous musicians! More Lucinda Williams on Wikipedia.

There's this process that comes about in writing a song where you just stop and see where it can go. Generally, a song will stay with the same idea. I might be thinking about a particular person, for instance. Then it will kind of go from there. And maybe by the end of the song, it will become something more universal.

Car Wheels on a Gravel Road. 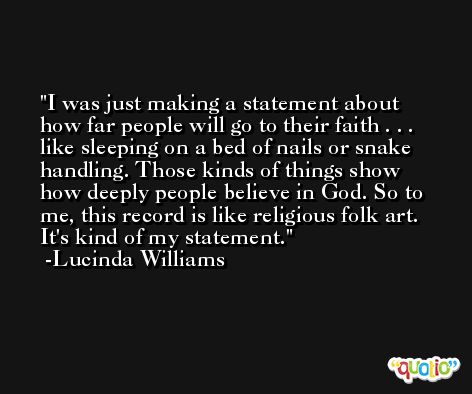 Y'all have made us so comfortable that we're going to do a couple of new songs.

Any time there's a major change, whether it's going into a relationship, getting out of a relationship, moving to a new city, a death -- that usually provides a catalyst for an explosion of creativity. 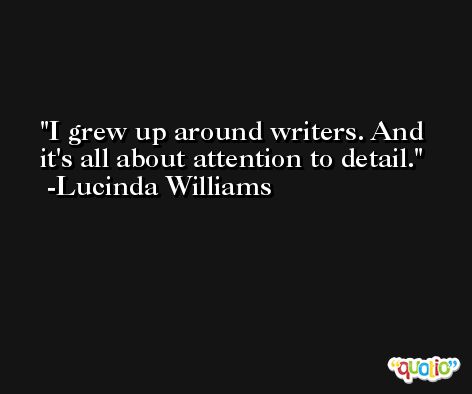 I can't begin to tell you how much my heart is breaking with what's going on in Louisiana. I haven't even begun to be able to deal with he loss of my mother, and now I'm dealing with the loss of the city my mother grew up in.

I just like to kiss and hug people! That's what I do! I'm physical!