"Lionel Tiger" is a Canada/Canadian-born, United States/American-based anthropologist. He is the Charles Darwin Professor of Anthropology at Rutgers University and co-Research Director of the Harry Frank Guggenheim Foundation. He is a graduate of McGill University, and the London School of Economics at the University of London, England. He is also a consultant to the United States Department of Defense/U.S. Department of Defense on the future of biotechnology.

Some of Tiger's works have included controversial concepts, including the biological origins of social interactions. Tiger published a work, The Imperial Animal, with Robin Fox in 1972, that advocated a 'social carnivore theory' of human evolution.

Tiger has predicted the higher status of women within society, in books such as The Decline of Males and Men in Groups. He has also written books such as The Pursuit of Pleasure, which discussed the concept that evolution has established the biological mechanisms of pleasure and that they have survival origins.

Lionel Tiger lives in New York City, and regularly contributes to mainstream media such as Psychology Today and The New York Times.

It is the formidable character of the species to routinely seek the improbable, the difficult, even the impossible, as a source of pleasure and self-justification. Who would try to write poems, or novels, or paint pictures unless he is an optimist?

Beauty is a marketing tool for Mother Nature's most basic product - reproduction - which in turn depends upon sexual attraction and success. 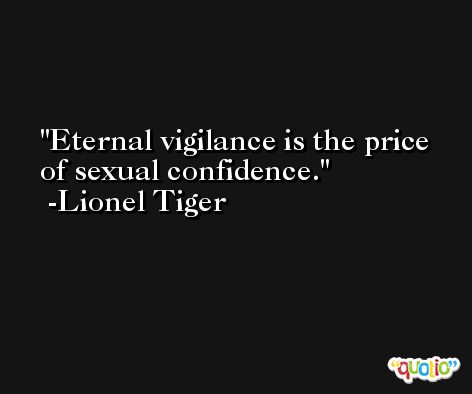