If you enjoy these quotes, be sure to check out other famous scientists! More Lewis Thomas on Wikipedia.

The cloning of humans is on most of the lists of things to worry about from Science, along with behaviour control, genetic engineering, transplanted heads, computer poetry and the unrestrained growth of plastic flowers.

Worrying is the most natural and spontaneous of all human functions. It is time to acknowledge this, perhaps even to learn to do it better. 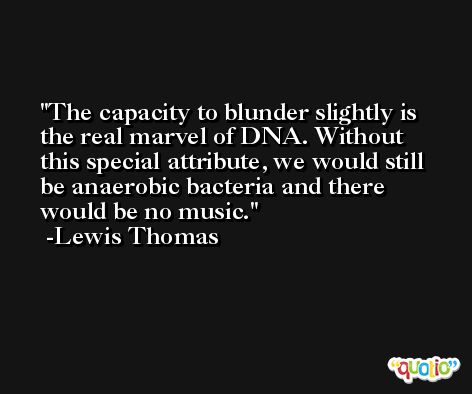 It is from the progeny of this parent cell that we all take our looks; we still share genes around, and the resemblance of the enzymes of grasses to those of whales is in fact a family resemblance.

We are, perhaps, uniquely among the earth's creatures, the worrying animal. We worry away our lives, fearing the future, discontent with the present, unable to take in the idea of dying, unable to sit still. 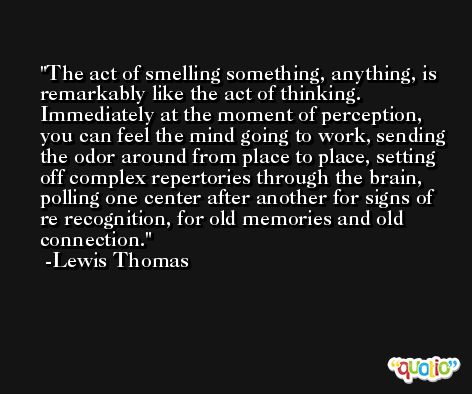 The uniformity of earth's life, more astonishing than its diversity, is accountable by the high probability that we derived, originally, from some single cell, fertilized in a bolt of lightning as the earth cooled.

The great secret of doctors, known only to their wives, but still hidden from the public, is that most things get better by themselves; most things, in fact, are better in the morning. 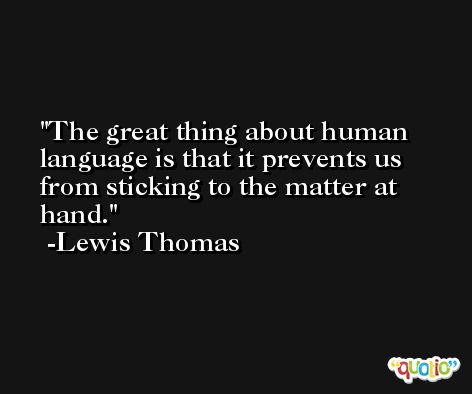 We pass the word around; we ponder how the case is put by different people, we read the poetry; we meditate over the literature; we play the music; we change our minds; we reach an understanding. Society evolves this way, not by shouting each other down, but by the unique capacity of unique, individual human beings to comprehend each other.

We are a spectacular, splendid manifestation of life. We have language. . . . We have affection We have genes for usefulness, and usefulness is about as close to a 'common goal' of nature as I can guess at. And finally, and perhaps best of all, we have music. 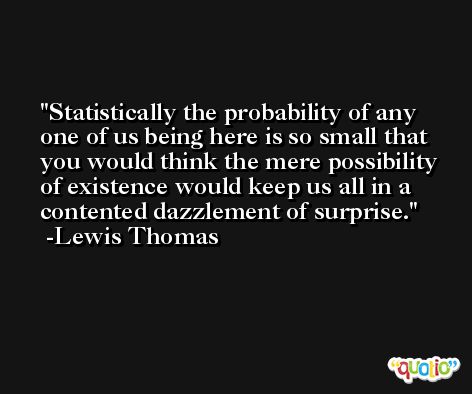 Ants are so much like human beings as to be an embarrassment. They farm fungi, raise aphids as livestock, launch armies into war, use chemical sprays to alarm and confuse enemies, capture slaves, engage in child labor, exchange information ceaselessly. They do everything but watch television.

The only solid piece of scientific truth about which I feel totally confident is that we are profoundly ignorant about nature... It is this sudden confrontation with the depth and scope of ignorance that represents the most significant contribution of twentieth-century science to the human intellect.