"Leonhard Euler" was a pioneering Swiss mathematician and physicist. He made important discoveries in fields as diverse as infinitesimal calculus and graph theory. He also introduced much of the modern mathematical terminology and Mathematical notation/notation, particularly for mathematical analysis, such as the notion of a function (mathematics)/mathematical function. He is also renowned for his work in mechanics, fluid dynamics, optics, astronomy, and music theory.

Euler is considered to be the pre-eminent mathematician of the 18th century and one of the greatest mathematicians to have ever lived. He is also one of the most prolific mathematicians; his collected works fill 60–80 quarto (text)/quarto volumes. He spent most of his adult life in St. Petersburg, Russian Empire/Russia, and in Berlin, Kingdom of Prussia/Prussia.

A statement attributed to Pierre-Simon Laplace expresses Euler's influence on mathematics: "Read Euler, read Euler, he is the master of us all."

If you enjoy these quotes, be sure to check out other famous mathematicians! More Leonhard Euler on Wikipedia.

Mathematicians have tried in vain to this day to discover some order in the sequence of prime numbers, and we have reason to believe that it is a mystery into which the human mind will never penetrate.

For since the fabric of the universe is most perfect and the work of a most wise Creator, nothing at all takes place in the universe in which some rule of maximum or minimum does not appear. 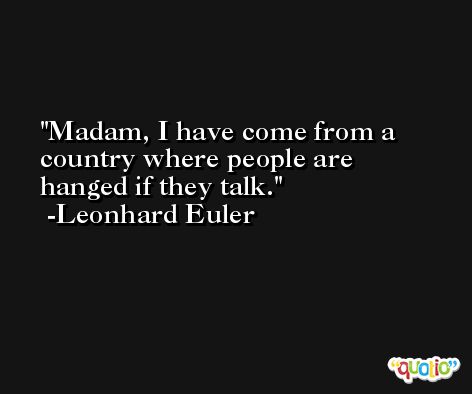 Although to penetrate into the intimate mysteries of nature and thence to learn the true causes of phenomena is not allowed to us, nevertheless it can happen that a certain fictive hypothesis may suffice for explaining many phenomena.