"Larry Garrison" is President of Silver Creek Entertainment in Los Angeles. He is an executive producer in film and television, a journalist, an author, an actor, and a publicist who works with magazine shows, print and radio. His company has produced and brokered news stories for ABC News, NBC News and other news media organizations.

These books are going to rock the nation. Elly and Ray are two of the three jurors who initially voted for guilty.

As far as I know I'm doing a book with him on the Jackson trial. All I can say is that he is a character. If there is a suit, it sounds like he's flip-flopping again. 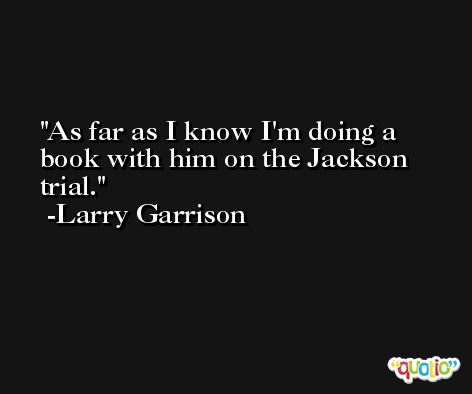 This is not about money. This is about the judicial system gone awry. This is about two jurors being pressured, being told they'd be kicked off the jury. Elly Cook is 79 years old and she doesn't give a damn about money right now. She's donating the money to feed the children.