"Kevin Drew" is a Canada/Canadian musician and songwriter who, together with Brendan Canning, founded the expansive Toronto baroque-pop collective Broken Social Scene. He was also part of the lesser-known KC Accidental, which consisted of Drew and Charles Spearin, another current member of Broken Social Scene.

Drew has shared in the direction of Broken Social Scene videos under the name Experimental Parachute Movement. In 2008 he wrote and directed a short film called "The Water," inspired by and starring his bandmate and former girlfriend Feist (singer)/Leslie Feist. In 2009, Drew contributed to the AIDS benefit album Dark Was the Night produced by the Red Hot Organization.

Drew grew up in west Toronto and attended the Etobicoke School of the Arts, along with Metric (band)/Metric's Emily Haines, Stars (Canadian band)/Stars' Amy Millan and novelist Ibi Kaslik, where he, Amy and Emily studied drama. He was married to Jo-ann Goldsmith, a social worker and an occasional trumpet player in BSS.

On January 15, 2013 Drew announced in an interview that he had begun working on a new album with The Archies songwriter, Andy Kim. Drew's second solo album, Darlings (Kevin Drew album)/Darlings, was released on 18 March 2014.

Thank you so very, very much. Look at us all. We're an army. 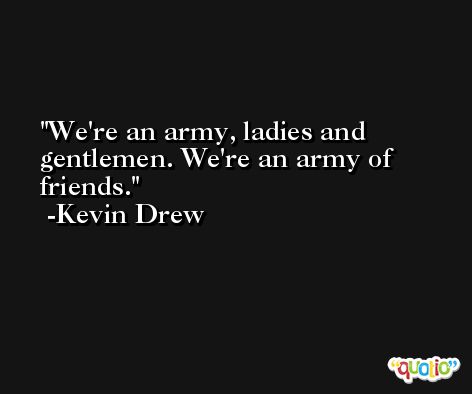 When we handed this record in, it confused a lot of people, even within the band. That's what I love about it -- I just find it this big, beautiful mess. Sometimes, albums should be experiments, and people who truly understand us know that's all we were doing from the get-go.

I thought it was absurd to take all this music. But it's a really honest film. 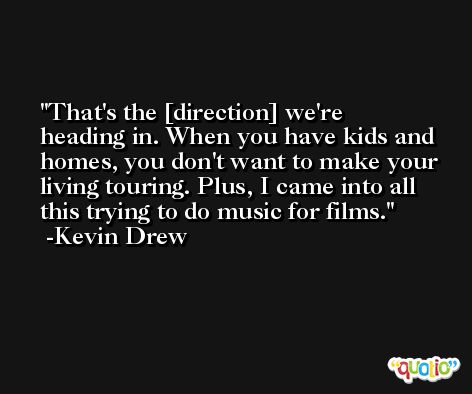 At the time it was all very personal — a very, very difficult record to finish. It was a frustrating time.

I'm gonna do a solo record, [Brendan and Ohad] are gonna do solo records. If we tour, it's gonna be so amazing just to [hit the road on a small scale]. Going into a restaurant, I've never been able to ask for a table for three, and that would be nice one day. 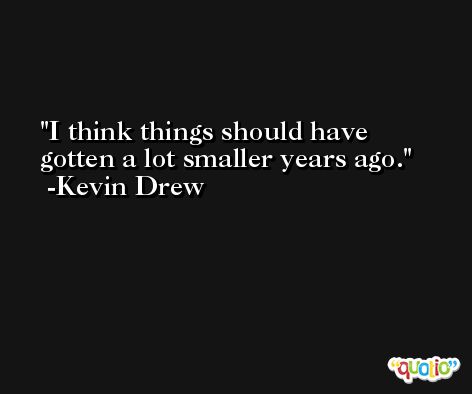