"Kerry Francis Bullmore Packer", Order of Australia/AC was an Australian media tycoon. The Packer family company owned a controlling interest in both the Nine Network/Nine television network and leading Australian publishing company Australian Consolidated Press, which were later merged to form Publishing and Broadcasting Limited (PBL). Outside Australia, Packer was best known for founding World Series Cricket. At the time of his death, Packer was the richest and one of the most influential men in Australia. In 2004, Business Review Weekly magazine estimated Packer's net worth at . Kerry Packer was considered as one of Australia's most powerful media proprietors.

If you enjoy these quotes, be sure to check out other famous businessmen! More Kerry Packer on Wikipedia.

I don't want to be left behind. In fact, I want to be here before the action starts.

I agree completely with my son James when he says 'Internet is like electricity. The latter lights up everything, while the former lights up knowledge'. 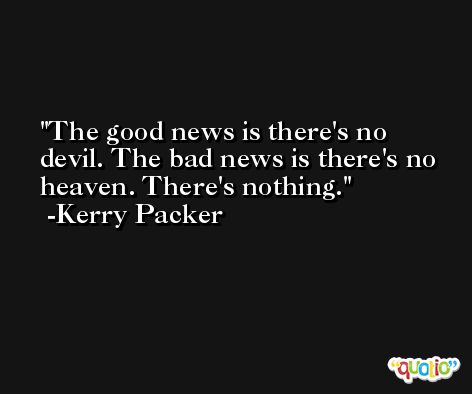 You only get one Alan Bond in your lifetime. And I've had mine.

The fact that I have entered into IT-related business is proof that businesses have to evolve and keep with time. One has to re-invent continuously.