"Joshua Blake Reed" is a former American college and professional American football/football player who was a wide receiver in the National Football League (NFL) for eight seasons during the early 2000s. He played college football for Louisiana State University (LSU), earned consensus All-American honors, and was recognized as the nation's best college receiver. He was picked by the Buffalo Bills in the second round of the 2002 NFL Draft.

Eric and Lee are going to draw a lot of double teams, so we've got to be able to throw to somebody else, ... As a slot receiver, I've got to get open. But the biggest thing is I've got to catch the ball. 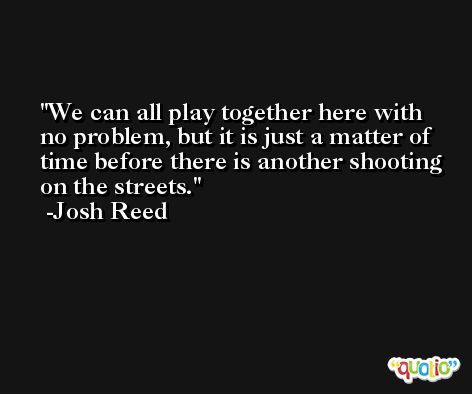 Every time you go out there it's an audition.

That was the table-setter for our season. Now we just know how good we are and we can take it from there. That really shifted the momentum back to us.

This is my job so I'm always concerned. I just wanted to go out there and give myself the best chance to make sure I still had a job.

Take a look around the gym. We are all here playing basketball together. Otherwise, we would be standing on some corner.