Newlee was hired as the ninth head coach in University of Idaho women’s basketball history on April 15, 2008.

The 2009-10 season will mark Newlee's second year at Idaho, his 26th season as a collegiate coach and his 11th overall as a head coach. His career has seen stops at Saint Mary’s (CA), Southwestern JC, Texas-San Antonio, Southern Methodist, Hawai’i and, most recently, at Idaho State. Overall, teams he coached compiled a 447-272 (.622) record and teams on which he was the head coach compiled a 141-128 (.524) record. Teams he coached have qualified for post-season play in 13 of the last 17 seasons.

It's an honor to be in any kind of post-season. It's a reward for winning the Big Sky title.

This will be a huge test for us, but we're going in to win. 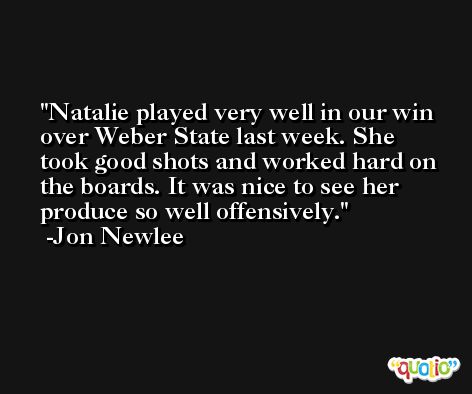 Natalie played big for us tonight. She took the ball hard to the basket and finished strong on every shot. She also made a couple of great skip passes that led to some outside shots for us.

I think she just is very talented offensively. She has scored all year, but she had stepped it up in the last couple of games in the Big Sky.