Born in Philadelphia, Pennsylvania, Jon Drummond is known for being among the world’s best starters. He is also well known for what could be called showmanship or taunting depending on one's perspective. Drummond has been called the "Clown Prince" of Track and Field.

His "showmanship" was visible with his membership in the HSI (Track team)/HSI enclave, along with training partners Maurice Greene (athlete)/Maurice Greene and Ato Boldon.

They handed me a bass and I don't know how to play a bass. But Adams was playing behind us. We were all singing, but we weren't playing. Nothing was plugged in. I was knocking down speakers and running around. The fans got a kick out of it.

The congregation wanted me to stay permanently, so I've done that. It's a disadvantaged community, and I wanted to help as many lives as I could. 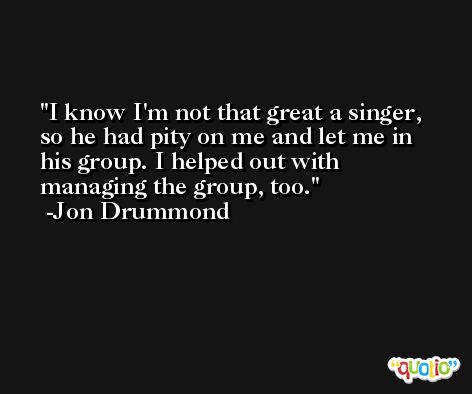 I now understand how the East Germans and Russians felt. Granted, we're the super power so we have to take the punch. Do I think we're the bad guys? Absolutely not. 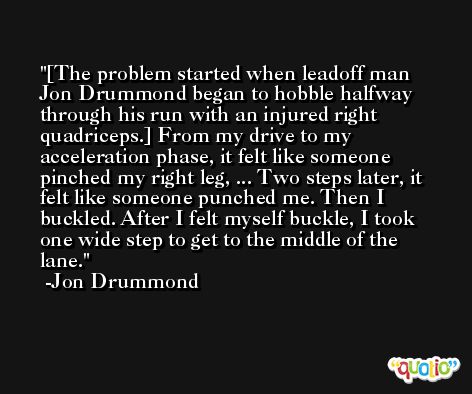 We use air-resistant weights and focus on improving specific areas to help with speed and core strength. We spend time in the weight room and then go out on the track and work on the technique and art of sprinting. It isn't just getting stronger.

So do I think a guy should be reprimanded or fired for saying blacks are faster? No. I think we've definitely come a long away from the attitudes in place a generation or two ago. But do I think that coach needs to have a conversation, have somebody pull him aside and explain that it's still a very sensitive subject? Absolutely.