"Jon Carroll" has been a columnist for the San Francisco Chronicle since 1982, when he succeeded columnist Charles McCabe. His column appears on the back page of the Chronicle's Datebook section Tuesdays through Fridays. Locally, he is best known for his moderate-to-liberal politics and his odd, self-referential humor.

Carroll was born in Los Angeles, California/Los Angeles and raised in nearby Pasadena, California/Pasadena. He attended (but did not finish) University of California, Berkeley/UC Berkeley, where he edited the campus humor magazine, the California Pelican (magazine)/California Pelican. Before becoming a newspaper columnist, he worked on the editorial staff at Rolling Stone magazine (assistant editor, 1970) where he wrote "Voice Denies Nixon Drug Use," Rags magazine, Oui (magazine)/Oui, a Playboy spinoff (editor, 1972); the Village Voice (West Coast editor, 1974); WomenSports magazine (Consulting editor); and New West magazine/New West magazine (editor, 1978, where he won a National Magazine Award in 1979).

Carroll has long lived in Oakland, California/Oakland, with his wife, author Tracy Johnston, and a cat named Pancho, occasional subject of his columns. He writes satire, memoir, political comment and anarchic humor.

If you enjoy these quotes, be sure to check out other famous journalists! More Jon Carroll on Wikipedia.

We knew Jon could be more assertive. He brings a lot of energy to the floor, and tonight there was an opportunity for him to provide leadership. He did that. 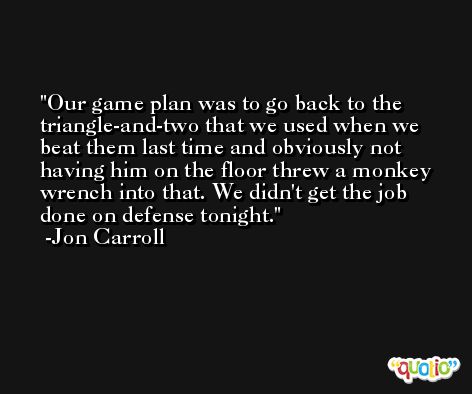 Holy Cross was very physical defensively and played a very tough man-to-man. Their intensity in the man-to-man threw us for a loop. It took us three quarters to get adjusted.

I think the thing to remember, though, the next time you hear someone who is really certain that he is on the side of the angels, is that the idea of angels was created by human beings, who are famous for being frequently untrustworthy and occasional.