"John Ames" is an American author and educator. His works include co-authorship with Renée Richards of two biographies: Second Serve: The Renée Richards Story, which was adapted for television as Second Serve starring Vanessa Redgrave; and No Way Renée: The Second Half of My Notorious Life. Ames has been on the faculty of Santa Fe Community College for more than 30 years, where he is a professor of English language/English.

Well, it's the farm's pickup.

It was a tragedy, ... I wish it had never happened. 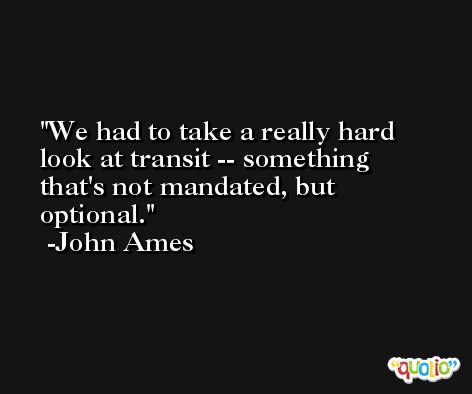 I was really happy with what the divers did all year long. The diving competition was more of a relaxed atmosphere, which allowed the divers to let it all out and not be worried. Michael Bennett became our sixth and final NCAA zone qualifier. So all of our divers qualified for the NCAA zone meet. I did not expect that to happen, but I think that it is great that it did.