"Jose Manuel Cora Amaro" (born May 14, 1965 in Caguas, Puerto Rico) is a former Major League Baseball player known as "The Rooster" with an 11 year career in the Major League Baseball/MLB spanning the years 1987 and 1989-1998. He played for the San Diego Padres of the National League and the Chicago White Sox, Seattle Mariners and Cleveland Indians of the American League. He played second base, shortstop, third base and also served as a designated hitter.

He's happy he's going to stay with this team.

The league is great, road trips and fans are unbelievable. There is no doubt that baseball is the No. 1 sport in Venezuela -- there is nothing even close. You have to deal with press here just like in the big leagues. The following is just like the big leagues. 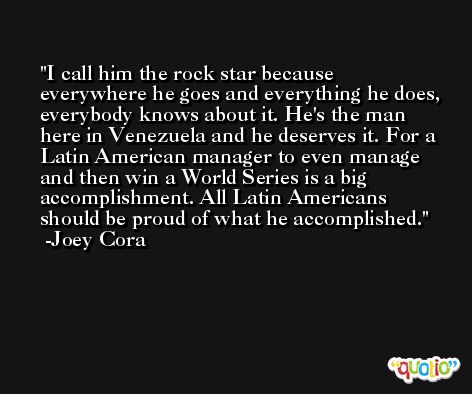 He wanted to get something done before the season started so he can just focus on the season and get rid of any trade rumors. They've been working on it all spring and he's happy that it got done. It was fair to both parties.