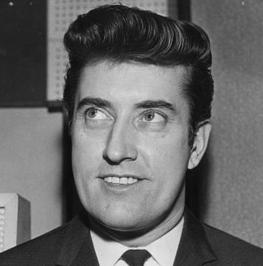 "Robert George "Joe" Meek" was a pioneering English record producer and songwriter. His best-remembered hit is the Tornados' Telstar (song)/"Telstar" (1962), which became the first record by a British group to reach number one in the Billboard Hot 100/US Hot 100. It also spent five weeks at number one the UK singles chart, with Meek receiving an Ivor Novello Award for this production as the "Best-Selling A-Side" of 1962.

Meek's other hits include "Don't You Rock Me Daddy-O" and "Cumberland Gap (folk song)/Cumberland Gap" by Lonnie Donegan (as audio engineer/engineer), "Johnny Remember Me" by John Leyton, "Just Like Eddie" by Heinz (singer)/Heinz, "Angela Jones" by Michael Cox (singer)/Michael Cox, "Have I the Right?" by the Honeycombs, and "Tribute to Buddy Holly" by Mike Berry (actor)/Mike Berry. Meek's concept album I Hear a New World, which contains innovative use of electronic sounds, was not released in his lifetime.

Meek also produced music for films such as Live It Up! (film)/Live It Up! (US title Sing and Swing, 1963), a pop music film which featured Gene Vincent, The Outlaws (UK band)/The Outlaws pop group, jazz musician Kenny Ball and others. Meek wrote most of the songs and incidental music, much of which was recorded by The Saints and which Meek produced.

If you enjoy these quotes, be sure to check out other famous businessmen! More Joe Meek on Wikipedia.

I Hear a New World.