"Jerry Krause" is a former professional basketball scout and general manager for, among other franchises, the Washington Wizards/Baltimore Bullets and, most notably, the Chicago Bulls of the National Basketball Association. He is a two-time recipient of the NBA Executive of the Year Award/NBA's Executive of the Year award.

Reinsdorf told me, 'You have an invitation to a press conference on Monday. The new manager of the White Sox asks that you be there,' ... Ozzie never forgot to this day.

Trent Johnson [Stanford coach] was great about it. Of course, we have to go to their place next year. 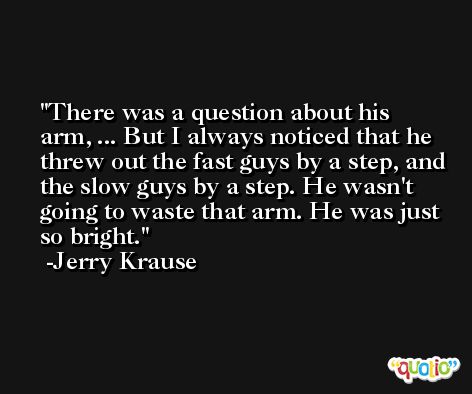 We're talking with them. We've talked to them about five years. We've talked home-and-home, single games. Obviously, it's a great program, and we'd like sometime to get to play them.