"Jerry Donald Fisher" is an United States/American R&B singer – Texas-born and Oklahoma-reared – known internationally for being the lead vocal with Blood, Sweat & Tears from 1971 to 1975, known to Dallas music fans for his R&B gigs from 1964 to 1972, and known on the coast of Mississippi in Bay Saint Louis as one-half of the husband–wife proprietorship of "Dock of the Bay," a restaurant and nightclub owned and operated by the two from 1976 to the spring of 2005, when they sold it a few months before Hurricane Katrina blew it away.

People critique the media if they're uncomfortable with the facts that are presented.

The problem with many people of such resolute and unbending attitudes is that the only facts that they can seem to grasp are the facts governing the lives of the Palestinians and Israelis now. 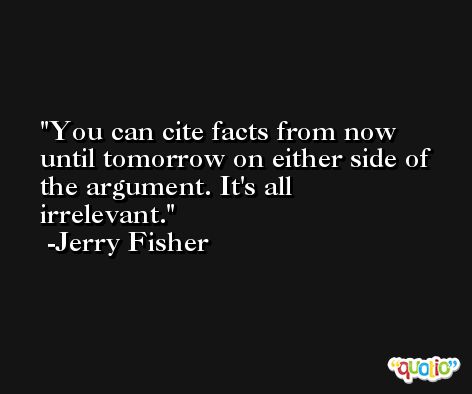