"Jeffrey Carl Simpson", Order of Canada/OC, is a Canadian journalist. He has been The Globe and Mail's national affairs columnist for almost three decades. He has won all three of Canada's leading literary prizes — the Governor General's Award for non-fiction book writing, the National Magazine Awards (Canada)/National Magazine Award for political writing, and the National Newspaper Award [http://www.cna-acj.ca/client/cna/cna.nsf/web/NNA?OpenDocument] for column writing. He has also won the Hyman Solomon Award [http://www.ppforum.ca/en/testimonialdinner/pasthysolomonawardwinners.asp] for excellence in public policy journalism and the Donner Prize for the best public policy book by a Canadian. In January, 2000, he became an Officer of the Order of Canada.

Everything is relative in Washington. And Canada and softwood lumber are relatively unimportant -- the point that Ms. Rice was trying to make yesterday in Ottawa.

I am very excited. I had a big old smile on my face and was very impressed. I think there is a real big buzz about the program now. We are catching people's eye. 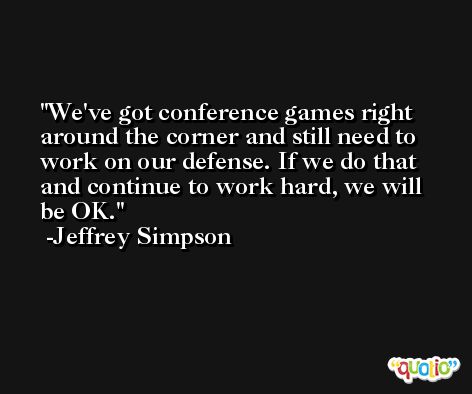 I can still do a lot better. I have been letting things that happen on the court get to me too much, like getting beaten on defense. Those are still things I can work on.