"Jeff Bertrand Coleman Blake" is a retired American football quarterback who played in the National Football League. Although he finished his career with the Chicago Bears, he was formerly a quarterback for the New York Jets, Cincinnati Bengals, New Orleans Saints, Baltimore Ravens, Arizona Cardinals and Philadelphia Eagles. He was NFL Draft/drafted in the sixth round of the 1992 NFL Draft by the Jets out of East Carolina University. His only Pro Bowl appearance came with the Bengals, when he was selected for the AFC team. In that contest, Blake threw a Pro Bowl record-long 92-yard touchdown pass to Yancey Thigpen.

Summer is when audiences expect us to deliver excitement. Some movies just didn't fulfill that promise.

Everybody was saying they're gonna go with what they have. That was the word we were getting. But I wasn't worried about it. If it's my time to go, it's my time to go. I have my kids and would love to see them play. 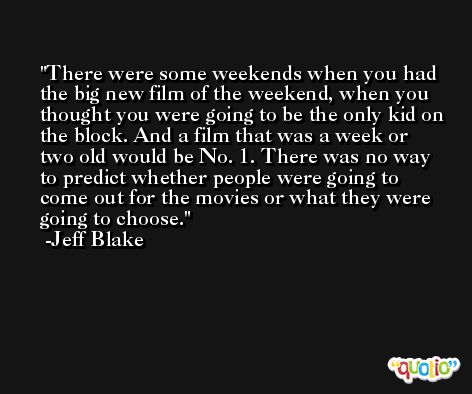 Was cussing me out from A to Z.

There were a lot of weekends where there were just no winners. Even in July, our best month of the year, you had two weekends where none of the films really worked. That's a scary thought to us. 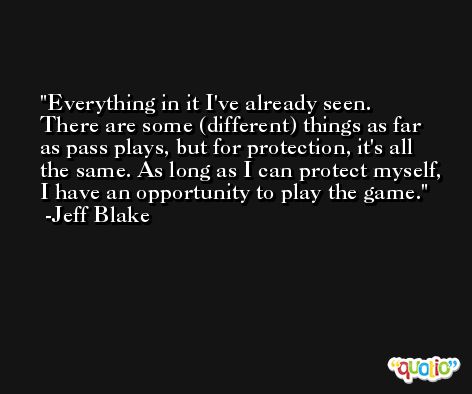 I'm just coming in to do whatever Coach wants me to do. I'm here to support my teammates. Playing 13 years in the league, I have a lot of knowledge of the game, and I can't take it with me so I'm here to help ... and be ready to play when my time comes.

The way you handle it is come back out the next week and throw five touchdowns; that's what Daunte did yesterday. 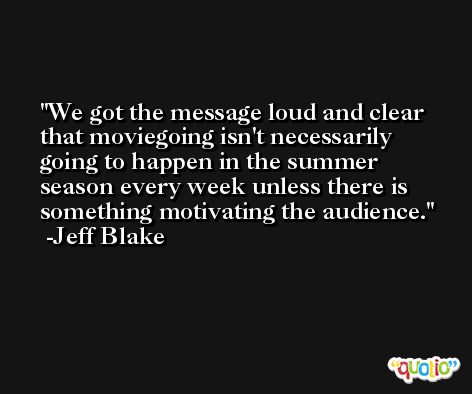