"Jean Renoir" was a French film director, screenwriter, actor, producer and author. As a film director and actor, he made more than forty films from the silent film/silent era to the end of the 1960s. His films Grand Illusion (film)/Grand Illusion (1937) and The Rules of the Game (1939) are often cited by critics as among the List of films considered the best/greatest films ever made. As an author, he wrote the definitive biography of his father, the painter Pierre-Auguste Renoir, Renoir, My Father (1962). Jean Renoir was ranked by the British Film Institute/BFI's Sight & Sound poll of critics in 2002 as the fourth greatest director of all time.

If you enjoy these quotes, be sure to check out other famous actors! More Jean Renoir on Wikipedia.

Wilshire Boulevard, ... It has no smell to it.

Goodbye Mr. Zanuck: it certainly has been a pleasure working at 16th Century Fox. 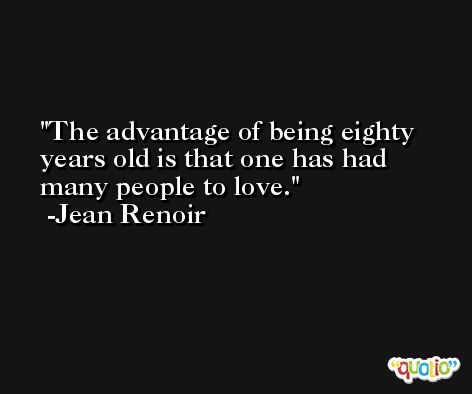 Is it possible to succeed without any act of betrayal?

Everyone has his reasons.