"Janet Malcolm" (born 1934) is an American writer, journalist on staff at The New Yorker magazine, and collagist. She is the author of Psychoanalysis: The Impossible Profession (1981), In the Freud Archives (1984) and The Journalist and the Murderer (1990).

Craig Seligman wrote of her: "Like Sylvia Plath, whose not-niceness she has laid open with surgical skill, she discovered her vocation in not-niceness ... Malcolm's blade gleams with a razor edge. Her critics tend to go after her with broken bottles." The influential critic Harold Bloom has praised her "wonderful exuberance," writing that Malcolm's books, "transcend what they appear to be: superb reportage."

If you enjoy these quotes, be sure to check out other famous writers! More Janet Malcolm on Wikipedia.

The dominant and most deep-dyed trait of the journalist is his timorousness. Where the novelist fearlessly plunges into the water of self-exposure, the journalist stands trembling on the shore in his beach robe. The journalist confines himself to the clean, gentlemanly work of exposing the grieves and shames of others.

Fidelity to the subject's thought and to his characteristic way of expressing himself is the sine qua non of journalistic quotation. 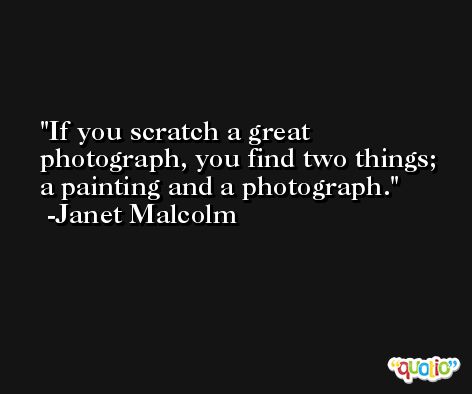 Analysts keep having to pick away at the scab that the patient tries to form between himself and the analyst to cover over his wounds. [The analyst] keeps the surface raw, so that the wound will heal properly.