"James Taranto" is an American journalist and columnist for The Wall Street Journal, editor of its former online editorial page OpinionJournal.com and a member of the newspaper's editorial board. He is best known for his daily online column Best of the Web Today. The column typically includes political, social, and media commentary in the form of conventional opinion writing as well as wordplay and other recurring themes on news stories crowdsourced from readers. He also appears occasionally on Journal Editorial Report.

Before joining the Wall Street Journal in 1996, Taranto spent five years as an editor at City Journal (New York)/City Journal. He has also worked for the Heritage Foundation and Reason (magazine)/Reason magazine.

He pursued a degree in journalism at California State University, Northridge (CSUN) but "never bothered to graduate" after "conflict with teachers and professors".

Isn't practicing abstinence inconsistently like being a little bit pregnant?

We haven't been paying close attention to the polls. 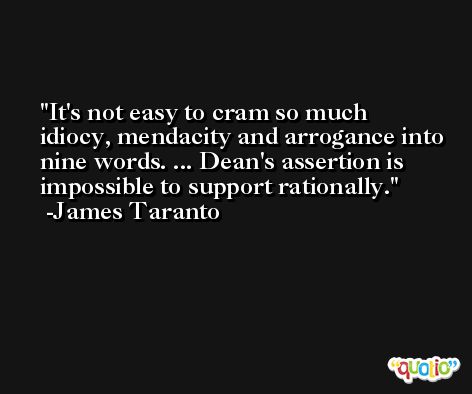