"Hutton Peter Gibson" is an American writer on Sedevacantism, a World War II veteran, the 1968 Jeopardy! Jeopardy! Tournament of Champions/grand champion and the father of 11 children, one of whom is the actor and director Mel Gibson.

Gibson is an outspoken critic, both of the post-Vatican II Roman Catholic Church and of those Traditionalist Catholics, like the Society of Saint Pius X, who reject Sedevacantism. Gibson is also a proponent of various Conspiracy theory/conspiracy theories. In a 2003 interview he questioned how the Nazism/Nazis could have disposed of six million bodies during the Holocaust and claimed that the September 11, 2001 attacks were perpetrated by remote control. He has also been quoted as saying the Second Vatican Council was "a Masonic plot backed by the Jews".

If you enjoy these quotes, be sure to check out other famous writers! More Hutton Gibson on Wikipedia.

They're after one world religion and one world government. That's why they've attacked the Catholic Church so strongly, to ultimately take control over it by their doctrine.

Go and ask an undertaker or the guy who operates the crematorium what it takes to get rid of a dead body. It takes one liter of petrol and 20 minutes. Now, six million? 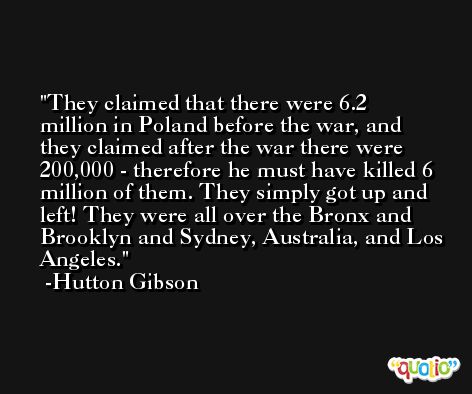 Anyway, there were more after the war than before.

Greenspan tells us what to do. Someone should take him out and hang him.