"Heyneke Meyer" is a rugby union coach. He succeeded Peter de Villiers as coach of South Africa's national team the Springboks on 27 January 2012 for a four-year term.

He was previously Head Coach at Leicester Tigers in the Guinness Premiership. He is the former coach of the Bulls (Super Rugby)/Bulls in the Super Rugby/Super 14 competition.

After studying sports psychology at the University of Pretoria, Meyer coached a variety of smaller clubs before joining the SWD Eagles as assistant coach in 1997. The following year he was promoted to head coach and took the team to seventh place in the Currie Cup and to the semi finals in the following year. In 2000 Meyer joined the Bulls (Super Rugby)/Northern Bulls as head coach. In 2002 he became head coach of the Blue Bulls and coached them to four Currie Cup titles in between 2002 and 2006. In 2007, the team became the first South African team to win the Super Rugby/Super 14 competition.

In February 2008 Meyer was expected to succeed Jake White as coach of the South African national team but after this job went to Peter De Villiers. Meyer quit rugby and accepted a senior position at a sports supplement company.

He will play, but I'm not saying where.

We want to give Derick a decent chance to make it. 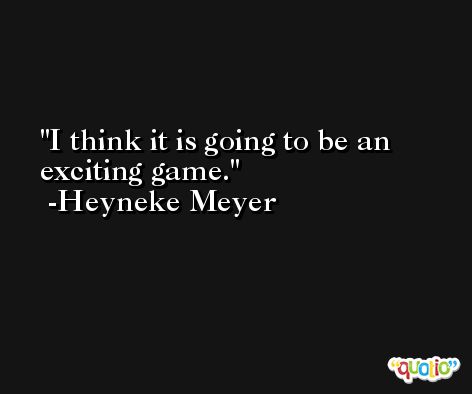 We'll treat it as another trial game and have a look at some different combinations at the same time.

It's time for every Bulls player to decide for himself how high he wants to lift his hand on Saturday. I've talked to some of the players on Tuesday and will get to the rest on Wednesday. They'll then know what I expect of each and everyone. 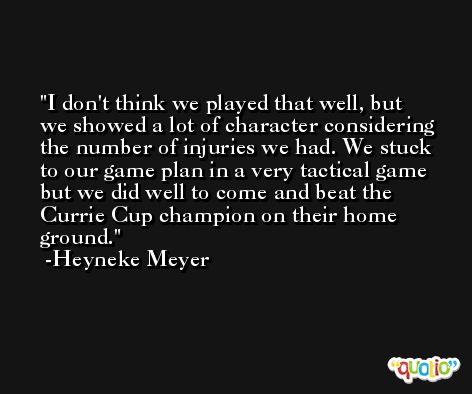 We will have a look later this week, but at the moment it doesn't look good.

It will mean we have to play our best rugby of the season if we want to beat the Chiefs for the first time ever on New Zealand soil. 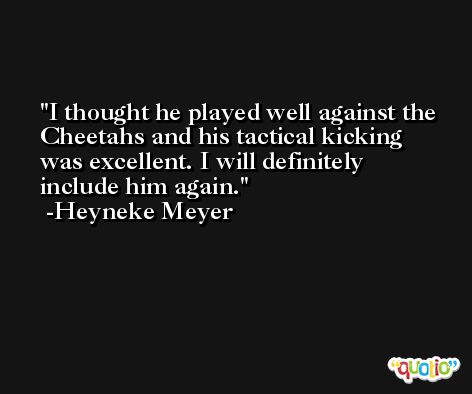