"Henry Steele Commager" was an United States/American historian who helped define Modern liberalism in the United States for two generations through his forty books and 700 essays and reviews. His principal scholarly works were his 1936 biography of Theodore Parker; his intellectual history The American Mind: An Interpretation of American Thought and Character since the 1880s (1950), which focuses on the evolution of liberalism in the American political mind from the 1880s to the 1940s; and his intellectual history Empire of Reason: How Europe Imagined and America Realized the Enlightenment (1977). In addition, he edited one of the most influential compilations of American historical documents, Documents of American History, which went through ten editions between 1938 and 1988 (the tenth, and last, coedited with Commager's former student Milton Cantor.)

If you enjoy these quotes, be sure to check out other famous historians! More Henry Steele Commager on Wikipedia.

The fact is that censorship always defeats its own purpose, for it creates, in the end, the kind of society that is incapable of exercising real discretion.

It's awfully hard to be the son of a great man and also of a half-crazy woman. 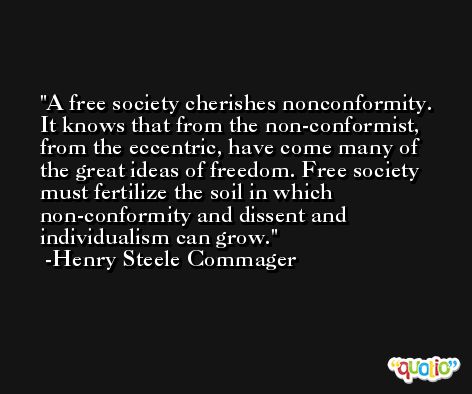 Censorship always defeats it own purpose, for it creates in the end the kind of society that is incapable of exercising real discretion.