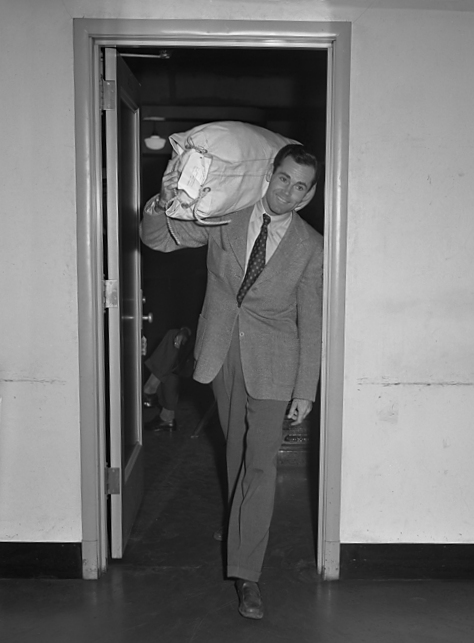 Fonda made his mark early as a Broadway theatre/Broadway actor. He also appeared in 1938 in plays performed in White Plains, New York, with Joan Tompkins. He made his Hollywood debut in 1935, and his career gained momentum after his Academy Awards/Academy Award-nominated performance as Tom Joad in The Grapes of Wrath (film)/The Grapes of Wrath, a 1940 Film adaptation/adaptation of John Steinbeck's novel about an Oklahoma family who moved west during the Dust Bowl. Throughout six decades in Hollywood, Fonda cultivated a strong, appealing screen image in such classics as The Ox-Bow Incident, Mister Roberts (1955 film)/Mister Roberts and 12 Angry Men (1957 film)/12 Angry Men. Later, Fonda moved both toward darker epics as Sergio Leone's Once Upon a Time in the West and lighter roles in family comedies like Yours, Mine and Ours (1968 film)/Yours, Mine and Ours with Lucille Ball, winning the Academy Award for Best Actor at the 54th Academy Awards for the movie On Golden Pond (1981 film)/On Golden Pond, his final film role.

If you enjoy these quotes, be sure to check out other famous actors! More Henry Fonda on Wikipedia.

I don't think there's anybody better when he wants to be good.

Good God, look at the Orioles. I always knew Baltimore was a sneaky town.