"Hannah Cowley" was an English playwright/dramatist and poet. Although Cowley's plays and poetry did not enjoy wide popularity after the nineteenth century, critic Melinda Finberg rates Cowley as "one of the foremost playwrights of the late eighteenth century" whose "skill in writing fluid, sparkling dialogue and creating sprightly, memorable comic characters compares favourably with her better-known contemporaries, Oliver Goldsmith/Goldsmith and Richard Brinsley Sheridan/Sheridan." Cowley’s plays were produced frequently during her lifetime. The major themes of her plays; including her first, The Runaway (1776), and her major hit which is being revived, The Belle's Stratagem (1780); revolve around marriage and how women strive to overcome the injustices imposed by family life and social custom.

If you enjoy these quotes, be sure to check out other famous dramatists! More Hannah Cowley on Wikipedia.

I have been five minutes too late all my life-time! 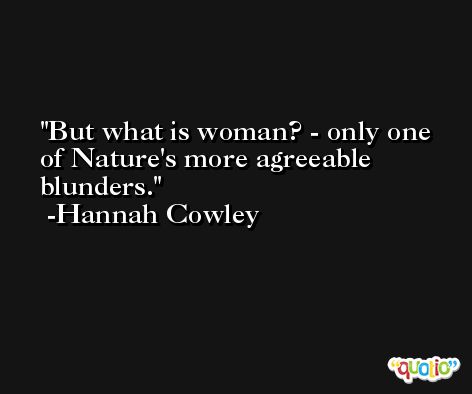