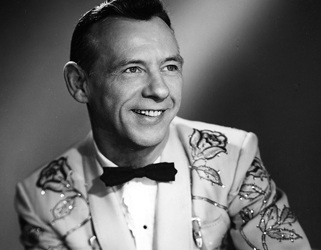 "Clarence Eugene "Hank" Snow" was a celebrated Canadian country music artist. In a career that spanned nearly 50 years, he recorded 140 albums and charted more than 85 singles on the Billboard (magazine)/Billboard country charts from 1950 until 1980. His number one hits include the self-penned songs "I'm Moving On (Hank Snow song)/I'm Moving On", "The Golden Rocket (song)/The Golden Rocket" and famous cover version/versions of "I Don't Hurt Anymore", "Let Me Go, Lover!", "I've Been Everywhere", "Hello Love (Hank Snow song)/Hello Love", as well as other top 10 hits.

If you enjoy these quotes, be sure to check out other famous musicians! More Hank Snow on Wikipedia.

I've had about 140 albums released, and I've done everything I wanted to do.

It's really sort of morbid, but she said her mother wanted to see me all her life. And when she died, she made just one request: that a picture of me be put into her casket. So somewhere in England, I'm in a casket.