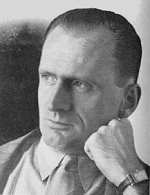 "Harry Allen Wolfgang Smith" was an American journalist and humorist whose books were popular in the 1940s and 1950s, selling millions of copies.

Smith was born in McLeansboro, Illinois/McLeansboro, Illinois, where he lived until the age of six. His family moved to Decatur, Illinois/Decatur in 1913 and then to Defiance, Ohio/Defiance, Ohio, finally arriving in Huntington, Indiana/Huntington, Indiana. It was at this point Smith dropped out of high school and began working odd jobs, eventually finding work as a journalist.

He began in 1922 at the Huntington Press, relocating to Jeffersonville, Indiana/Jeffersonville, Indiana, and Louisville, Kentucky/Louisville, Kentucky. In Florida, editing the Sebring American in 1925, he met society editor Nelle Mae Simpson, and they married in 1927. The couple lived in Oklahoma, where Smith worked at the Tulsa Tribune, followed by a position at the Denver Post. In 1929, he became a United Press rewrite man, also handling feature stories and celebrity interviews. He continued as a feature writer with the New York World-Telegram from 1934 to 1939.

If you enjoy these quotes, be sure to check out other famous journalists! More H. Allen Smith on Wikipedia.

Put it back in the horse! [on tasting his first American beer].