"Luigina "Gina" Lollobrigida" is an Italian actress, photojournalism/photojournalist and sculptor. She was one of the highest profile European actresses of the 1950s and early 1960s, a period in which she was considered to be a sex symbol.

As her film career slowed, she established second careers as a photojournalist and sculptor. In the 1970s, she scooped the press by gaining an exclusive interview with Fidel Castro, the revolutionary Communist dictator of Cuba.

She has continued as an active supporter of Italian and Italian American causes, particularly the National Italian American Foundation (NIAF). In 2008, she received the NIAF Lifetime Achievement Award at the Foundation's Anniversary Gala. In 2013, she sold her jewelry collection, and donated the nearly $5 million from the sale to benefit stem cell therapy research.

If you enjoy these quotes, be sure to check out other famous actresses! More Gina Lollobrigida on Wikipedia.

I do what I like now. I just don't have time for it all.

I've had many lovers and still have romances. I am very spoiled. All my life, I've had too many admirers. 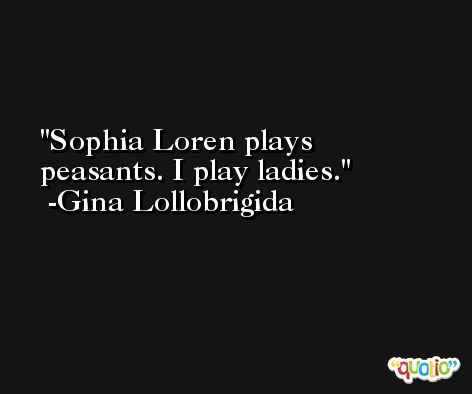 I have experience seducing nephews.

My cinema -- the '50s, '60s -- is different from the cinema today so I thought that it would not be bad to show that kind of cinema where we could dream.