"Geraint Owen Jones" Member of the Order of the British Empire/MBE is a Papua New Guinean-born, Australian-raised England cricket team/English cricketer of Welsh descent. Until August 2006 he was the first-choice wicketkeeper for England in both Test cricket/Test and One-day cricket, but fell behind Chris Read, Paul Nixon, Matt Prior and Tim Ambrose. He captains Gloucestershire County Cricket Club/Gloucestershire in first-class cricket and also plays international cricket for Papua New Guinea national cricket team/Papua New Guinea.

One-day cricket is an intense test of skills, we haven't performed as we should have.

The team has changed in the last six months, the side we had the success with will hopefully get together again. 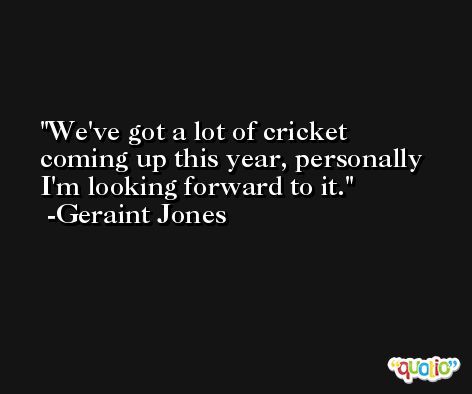 We want to win all the one-day games that we can, it's just that we've not had the success we'd sought.