"Francisco Franco Bahamonde" was a Spanish general who was the dictator of Spain from 1939 until his death in 1975. Coming from a military background, he became the youngest general in Europe in the 1920s.

A strong conservative, he was shocked when the monarchy was removed and replaced with a Second Spanish Republic/democratic republic in 1931. With the Spanish general election, 1936/1936 elections, the Spanish Confederation of Autonomous Right-wing Groups/conservatives fell and the leftist Popular Front (Spain)/Popular Front came to power. Looking to overthrow the republic, Franco and other generals staged a Spanish coup of July 1936/partially successful coup, which started the Spanish Civil War. With the death of the other generals, Franco quickly became Nationalist faction (Spanish Civil War)/his faction's only leader.

If you enjoy these quotes, be sure to check out other famous leaders! More Francisco Franco on Wikipedia.

There will be no communism.

American students are more frank compared with Asian and Filipino students. It's taught me how to try and understand students and how to best deal with them. 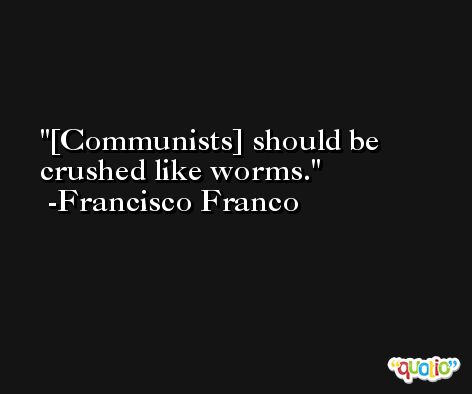