"Sir Ernest Henry Shackleton", Commander of the Royal Victorian Order/CVO, Officer of the Most Excellent Order of the British Empire/OBE, Fellow of the Royal Geographical Society/FRGS was a polar explorer who led three British expeditions to the Antarctic, and one of the principal figures of the period known as the Heroic Age of Antarctic Exploration. Born in County Kildare, Ireland, Shackleton and his Anglo-Irish family moved to Sydenham in suburban London when he was ten. His first experience of the polar regions was as third officer on Captain Robert Falcon Scott's Discovery Expedition, 1901–04, from which he was sent home early on health grounds, he and his companions Robert Falcon Scott/Scott and Edward Adrian Wilson/Wilson set a new southern record by marching to latitude 82°S. During the Nimrod Expedition/second expedition 1907–1909 he and three companions established a new record Farthest South latitude at 88°S, only 97 geographical miles (112 statute miles, 180 km) from the South Pole, the largest advance to the pole in exploration history. Also, members of his team climbed Mount Erebus, the most active Antarctic volcano. For these achievements, Shackleton was knighted by King Edward VII on his return home.

If you enjoy these quotes, be sure to check out other famous explorers! More Ernest Shackleton on Wikipedia.

I called to the other men that the sky was clearing, and then a moment later I realized that what I had seen was not a rift in the clouds but the white crest of an enormous wave.

I seemed to vow to myself that some day I would go to the region of ice and snow and go on and on till I came to one of the poles of the earth, the end of the axis upon which this great round ball turns. 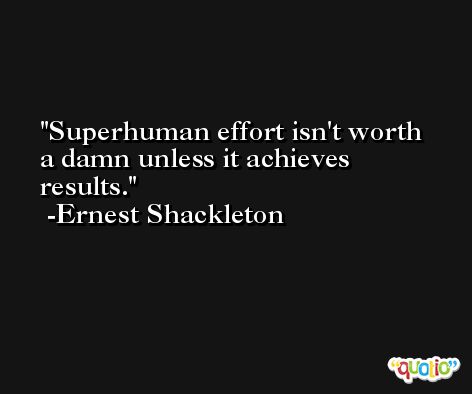 Now my eyes are turned from the South to the North, and I want to lead one more Expedition. This will be the last... to the North Pole.

Difficulties are just things to overcome, after all. 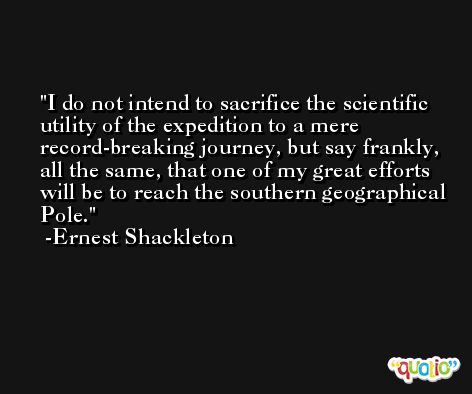 If I had not some strength of will I would make a first class drunkard.

After months of want and hunger, we suddenly found ourselves able to have meals fit for the gods, and with appetites the gods might have envied. 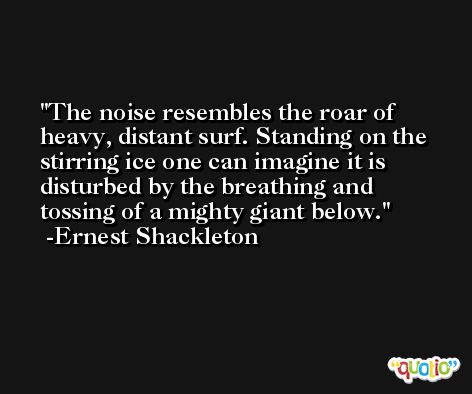