"Eric Stoltz" is an American actor, Television director/director and Film producer/producer. He is known for playing the role of Roy L. Dennis/Rocky Dennis in the biographical drama film Mask (film)/Mask, which earned him the nomination for a Golden Globe Award for Best Supporting Actor – Motion Picture/Golden Globe Award for Best Supporting Actor in a Motion Picture, and has appeared in a wide variety of films from mainstream fare like Some Kind of Wonderful (film)/Some Kind of Wonderful to independent films like Pulp Fiction, Killing Zoe, and Kicking and Screaming (1995 film)/Kicking and Screaming. In 2010, he portrayed Daniel Graystone in the science fiction television series Caprica (TV series)/Caprica, and became a regular director on the television series, Glee (TV series)/Glee.

If you enjoy these quotes, be sure to check out other famous actors! More Eric Stoltz on Wikipedia.

It seems that whatever we do is somehow beyond reproach - murder, rape, drunk driving - as long as we go on a TV show and apologize.

The world is a disaster, so it's nice to be able to lose yourself in a fun story about things that are beyond our comprehension. 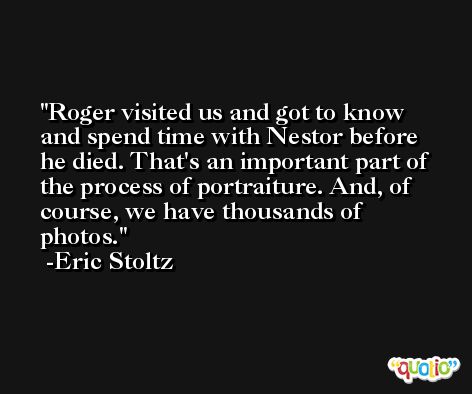 There's a strange sense of accomplishment in making an independent film. Everything's against you; there's no time, and even less money- you bring a bottle of glue, chip in twenty bucks, and hope you all make it through the day. If you manage to finish it and it actually turns out to be pretty good, it's thrilling.

When you're in a movie, they treat you like you're four years old and give you whatever you want. 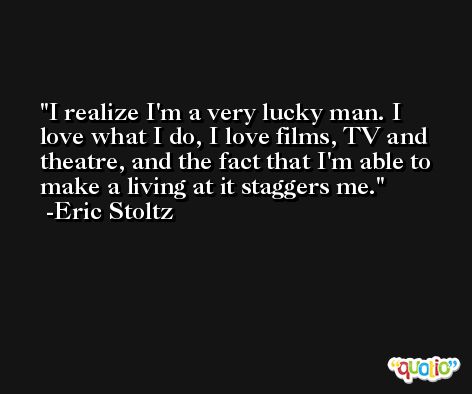 It's hard not to get a big head in the film industry, there are people on a set paid to cater to your every need, from the minute you arrive until you go home. It's kind of strange, but not unpleasant.