"Elizabeth Janeway" was an American author and critic.

Born "Elizabeth Ames Hall" in Brooklyn, New York, her naval architect father and homemaker mother fell on hard times during the Great Depression/Depression, leading her to end her Swarthmore College education and help support the family by creating bargain basement sale slogans (she graduated from Barnard College just a few years later, in 1935).

Never a supporter of the Communist Party or even a socialist, she did breathe the progressive air of 1930s New York City; she always laughed as she described how she and a Barnard friend met their physical education requirement by improvising a tap-dance version of The Internationale. Intent on becoming an author, Janeway took the same creative writing class again and again to help hone her craft. While working on her first novel, The Walsh Girls, she met and married Eliot Janeway, a much-quoted economist who was to enjoy some influence with presidents Franklin Delano Roosevelt and Lyndon B. Johnson (he was known as "Calamity Janeway" for his pessimistic economic forecasts). Elizabeth described Eliot as "the most intelligent man I had ever met."

If you enjoy these quotes, be sure to check out other famous writers! More Elizabeth Janeway on Wikipedia.

Unless I am what I am and feel what I feel -- as hard as I can and as honestly and truly as I can -- then I am nothing.

We don't get offered crises, they arrive. 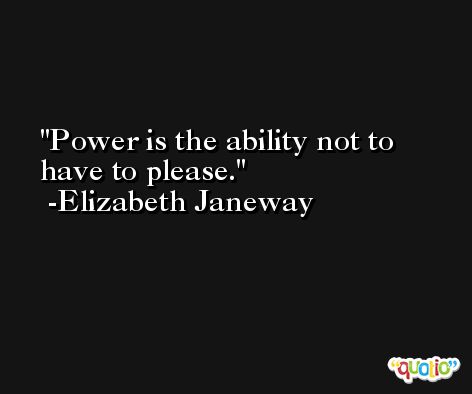 I have a problem about being nearly sixty: I keep waking up in the morning and thinking I'm thirty-one.

Such simplicity cannot be taught. But it can be denied and lost. 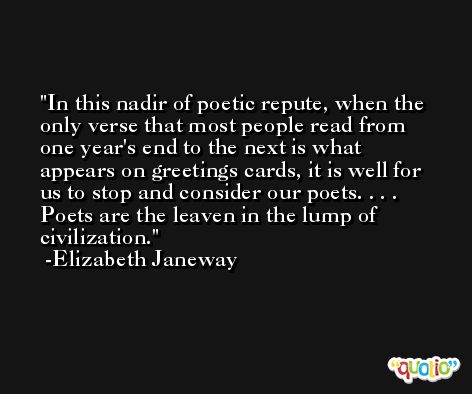 The Goddamn human race deserves itself, and as far as I'm concerned it can have it.

Growing up human is uniquely a matter of social relations rather than biology. What we learn from connections within the family takes the place of instincts that program the behavior of animals; which raises the question, how good are these connections? 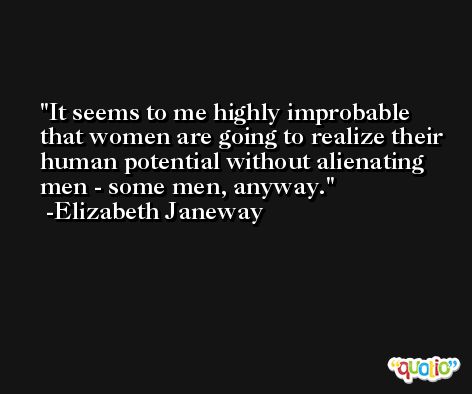 If one is going to change things, one has to make a fuss and catch the eye of the world.

Like their personal lives, women's history is fragmented, interrupted; a shadow history of human beings whose existence has been shaped by the efforts and the demands of others. 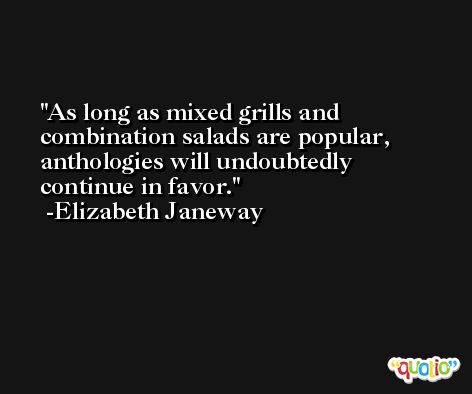