"Eknath Easwaran" was a spiritual teacher, an author of books on meditation and ways to lead a fulfilling life, as well as a translator and interpreter of Indian literature.

In 1961 Easwaran founded the Blue Mountain Center of Meditation and Nilgiri Press, based in northern California. Nilgiri Press publishes over two dozen books he authored.

Easwaran was influenced by Mohandas K. Gandhi, whom he met when he was a young man. Easwaran developed a method of meditation – silent repetition in the mind of memorized inspirational passages from the world's great religions – which later came to be known as Passage Meditation.

If you enjoy these quotes, be sure to check out other famous writers! More Eknath Easwaran on Wikipedia.

Patience can't be acquired overnight. It is just like building up a muscle. Every day you need to work on it.

Through meditation and by giving full attention to one thing at a time, we can learn to direct attention where we choose. 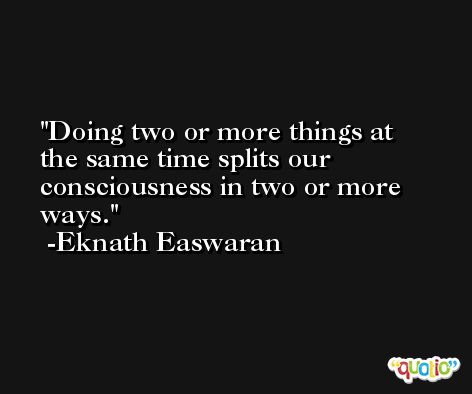