Cahoon start in collegiate hockey came as a player for Boston University Terriers men's ice hockey/Boston University starting three seasons for the Terriers which included back-to-back National Championships in 1971 NCAA Division I Men's Ice Hockey Tournament/1971 and 1972 NCAA Division I Men's Ice Hockey Tournament/1972. After graduating with a Bachelor of Science/B.S. in education, Cahoon continued his playing career for one more season, lacing it up for seven games for the New England Blades of the Eastern Hockey League/EHL, the league's last year in operation. Cahoon began his coaching career the following season, leading Lehigh University club team to the 1973-74 Mid-Atlantic Conference title.

We've got to remain on target and take care of detail, but at the same time you can't expend yourself at practices and not have anything left for the weekend.

We were a little too sloppy in all three periods to be able to squeak out a win. 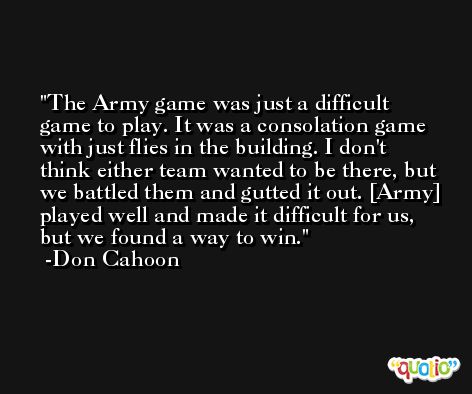 There's just a little bit of a swagger when you start to win games. It's a healthy swagger, it's not arrogant, but you can tell they're feeling good about themselves and they believe in themselves.

We're a pretty good skating team. We have to be able to anticipate extremely well, and we have to put ourselves in a position where we don't hurt ourselves around the rink. If we're caught out of position and we're giving up speed to boot, then we're at a distinct disadvantage. 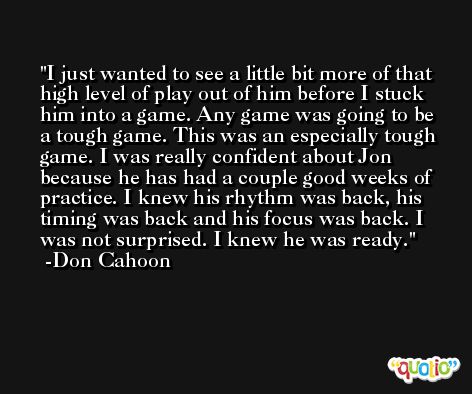 It was a great play by Matt Anderson knocking the puck down and finding Davis on a quick transition. I didn't expect to see that move from Chris to be honest with you. It was a nifty, backhand, five-hole dribble. I hope he's got a few more tricks up his sleeve.

When you assess what Marvin does over the course of the game, he is one of our biggest threats on the ice. He leads the country in shots on net, and he's threatening in every shift that he is out there. You can't blame this on Marvin. That was a tough play.