Gillespie was a trumpet virtuoso and improvisation/improviser, building on the virtuoso style of Roy Eldridge but adding layers of harmony/harmonic complexity previously unheard in jazz. His beret and horn-rimmed spectacles, his scat singing, his bent horn, pouched cheeks and his light-hearted personality were essential in popularizing bebop.

In the 1940s Gillespie, together with Charlie Parker, became a major figure in the development of bebop and modern jazz. He taught and influenced many other musicians, including trumpeters Miles Davis, Jon Faddis, Fats Navarro, Clifford Brown, Arturo Sandoval, Lee Morgan, Chuck Mangione, and balladeer Johnny Hartman

If you enjoy these quotes, be sure to check out other famous musicians! More Dizzy Gillespie on Wikipedia.

I think the idea is now for blacks to write about the history of our music. It's time for that, because whites have been doing it all the time. It's time for us to do it ourselves and tell it like it is.

It's taken me all my life to learn what not to play. 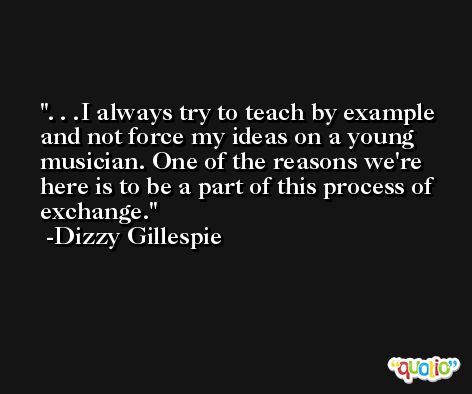 Ideas, ideas, backward and forward. His influence is layers and layers of spirit.