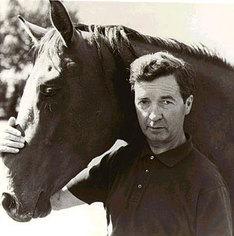 After wartime service in the RAF, Francis became a full-time jump-jockey, winning over 350 races and becoming champion jockey of the British National Hunt. He came to further prominence as jockey to Queen Elizabeth The Queen Mother, riding her horse Devon Loch when it fell, for unexplained reasons, while close to winning the Grand National. He then retired from the turf and became a professional journalist and novelist.

All his novels deal with crime in the horse-racing world, some of the criminals being outwardly respectable figures. The stories are narrated by one of the key players, often a jockey, but sometimes a trainer, an owner, a bookie, or someone in a different profession, peripherally linked to racing. This person is always facing great obstacles, often including physical injury, from which he must fight back with determination. More than forty of these novels became international best-sellers.

If you enjoy these quotes, be sure to check out other famous writers! More Dick Francis on Wikipedia.

In all income groups you find your average regulation slob who sniggers at anarchy but calls the police indignantly to his burglarized home, who is actively anti-authority until he needs to be saved from someone with a gun.

It was a terrible day. I can only console myself with the fact that if it hadn't happened I wouldn't have written a book. As a result I was asked to write my autobiography. 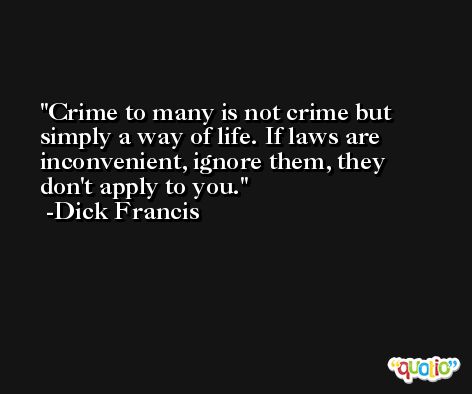 Love's easy to learn. It's like taking a risk. You set your mind on it and refuse to be afraid, and in no time you feel terrifically exhilarated and all your inhibitions fly out the window.

I am firmly against women riding in National Hunt races. 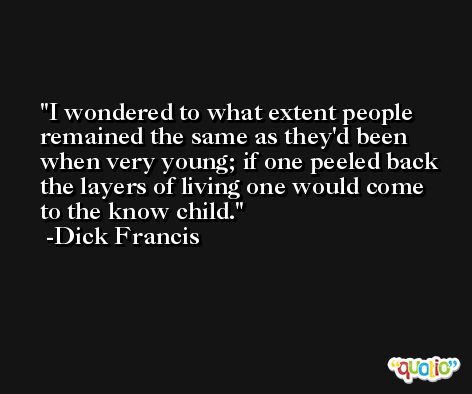