"Richard Allen "Dick" Davies" was an American basketball player. He played for the gold medal-winning United States men's national basketball team at the 1964 Summer Olympics. He is also the youngest brother of Bob Davies, who was inducted into the Naismith Memorial Basketball Hall of Fame as a player in 1970.

Davies was born and raised in Harrisburg, Pennsylvania and attended John Harris High School. He then attended Gettysburg College and played for his brother, who was the coach at the time, before transferring to LSU Tigers men's basketball/Louisiana State University (LSU) where he lettered for two seasons.

Standing at and weighing 176 pounds (80 kg), Davies played the guard (basketball)/guard position. He was captain (sports)/captain of LSU for one season, and in 1960 was selected by the St. Louis Hawks in the 11th round of the 1960 NBA Draft/NBA Draft. Despite his late-round selection, Davies opted to play in the Amateur Athletic Union for the Akron Goodyear Wingfoots. He was selected to represent the United States in the 1964 Summer Olympics, one in which they went 9–0 and won the gold medal. Davies averaged 3.4 points per game, and his personal tournament-high was 12 points in the opening game against South Korea.

We know that 'Monday Night Football' is really popular out here because people bet on it. People who lose on the college games on Saturday and the pro games on Sunday try to make it all up on Monday night. That's a major factor in the popularity of 'Monday Night Football' across the country. People who have lost over the weekend try to get back to even. Whether they do or not is another story.

The people who want to push for the end of legalized sports gambling in Nevada would be encouraging the crooks. And they would be counterproductive to what they want to accomplish. 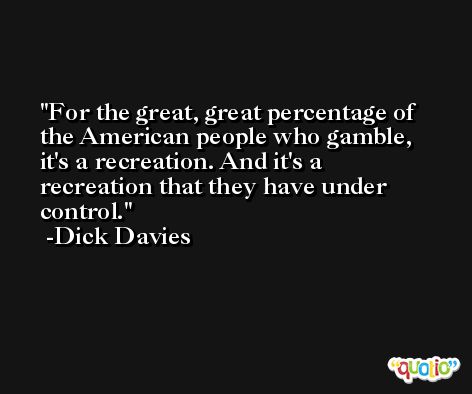 You go back to the creation of organized sports in the United States before the Civil War, and you see a very close relationship between sports and gambling. Baseball really got going as a professional sport because gamblers really found it to be an attractive venue as an alternative to betting on the ponies.