"Diana Lee" or "Diana Lee-Hsu" is an United States/American Model (person)/model and actress. She was chosen as Playboy's Playboy Playmate/Playmate of the Month for May 1988. Her centerfold was photographed by Stephen Wayda and Richard Fegley.

As an actress, she performed in several Playboy videos and had an appearance in the 1989 James Bond movie Licence to Kill. In the film, Lee played Loti, a Hong Kong narcotic agent. She also is prominently featured in the film's title sequence.

Arts and culture do not really have a geopolitical boundary. So it is probably one of the best ways of cultivating understanding between people.

I said if he was willing to focus, I would help him build the best collection of its kind. 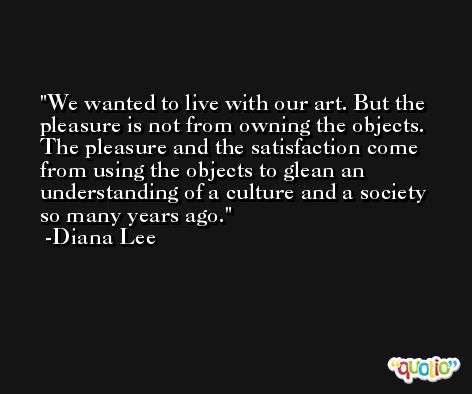 There had to be maximum wall space in order to display the art as well as Roy's collection of rare books, because we both wanted to live with the art. He also has a large collection of Western paintings and I have a lot of Chinese paintings and calligraphy. You have to blend those two styles together and also blend the household furnishings.