Jensen has published several books, including The Culture of Make Believe and Endgame (Derrick Jensen books)/Endgame, that question and critique civilization as an entire social system, exploring its inherent values, hidden premises, and modern links to supremacism, oppression, and genocide, as well as corporate, domestic, and worldwide ecological abuse. He has also taught creative writing at Pelican Bay State Prison and Eastern Washington University.

If you enjoy these quotes, be sure to check out other famous writers! More Derrick Jensen on Wikipedia.

Writing is really very easy. Tap a vein and bleed onto the page. Everything else is just technical.

What I fear and desire most in this world is passion. I fear it because it promises to be spontaneous, out of control, unnamed, beyond my reasonable self. I desire it because passion has color, like the landscape before me. It is not pale. It is not neutral. It reveals the backside of the heart. 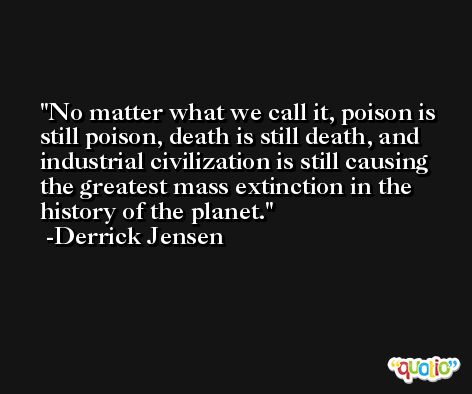 For us to maintain our way of living, we must tell lies to each other and especially to ourselves. The lies are necessary because, without them, many deplorable acts would become impossibilities.

What this means is that corporations and those who run them cannot stop exploiting resources and amassing wealth until they have... .I cannot finish this sentence, because the truth is that can never stop; like cancer, they can only continue to expand until they kill the host. 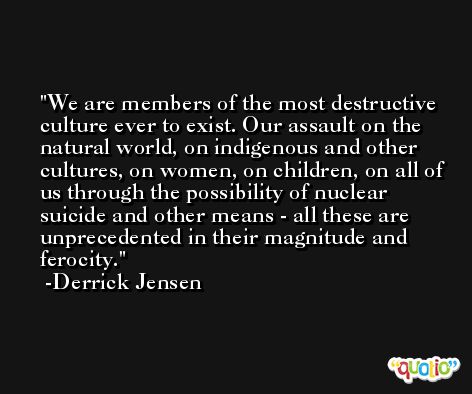