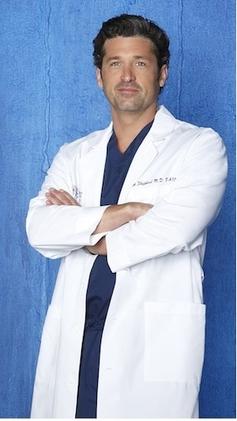 "Derek Christopher Shepherd", Doctor of Medicine/M.D., also referred to as McDreamy, is a fictional surgeon on the American Broadcasting Company/ABC medical drama Grey's Anatomy. The character is portrayed by actor Patrick Dempsey, who was nominated in 2006 and 2007 Golden Globe for the Best Performance by an Actor in a Television Series Drama for the role, and the 2006 SAG Award for the Outstanding Performance by an Actor in a Drama Series award. He was married to Addison Montgomery/Kate Walsh) and is now happily married to longtime girlfriend Meredith Grey (Ellen Pompeo). Derek was formerly the Chief of Surgery at Seattle Grace Mercy West Hospital, but abruptly resigned as chief in the seventh season following the shooting.

There is a land called Passive Agresseva, and you are their queen.