"David Takayoshi Suzuki", is a Canadian academic, science Presenter/broadcaster and environmentalism/environmental activist. Suzuki earned a Doctor of Philosophy/Ph.D in zoology from the University of Chicago in 1961, and was a professor in the genetics department at the University of British Columbia from 1963 until his retirement in 2001. Since the mid-1970s, Suzuki has been known for his TV and radio series, documentaries and books about nature and the environment. He is best known as host of the popular and long-running CBC Television science program, The Nature of Things, seen in over forty nations. He is also well known for criticizing governments for their lack of action to protect the environment.

A long time activist to reverse global climate change, Suzuki co-founded the David Suzuki Foundation in 1990, to work "to find ways for society to live in balance with the natural world that does sustain us." The Foundation's priorities are: oceans and sustainable fishing, climate change and Renewable energy/clean energy, sustainability, and Suzuki's Nature Challenge. The Foundation also works on ways to help protect the oceans from large oil spills such as the oil spill in the Gulf of Mexico. Suzuki has also served as a director of the Canadian Civil Liberties Association from 1982 to 1987.

If you enjoy these quotes, be sure to check out other famous scientists! More David Suzuki on Wikipedia.

We're in a giant car heading towards a brick wall and everyones arguing over where they're going to sit.

Our personal consumer choices have ecological, social, and spiritual consequences. It is time to re-examine some of our deeply held notions that underlie our lifestyles. 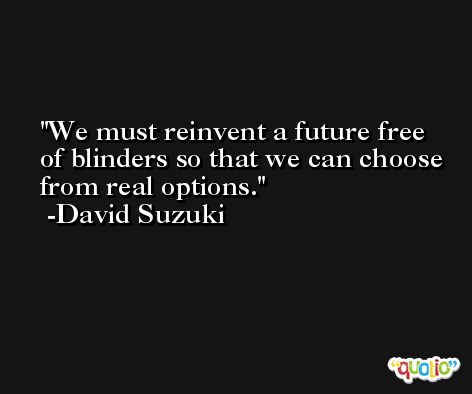 Education has failed in a very serious way to convey the most important lesson science can teach: skepticism.

The Canada we see in this report does not reflect the one we hold in our hearts, ... Canadians expect more and they expect better. We should be outraged that we are among the worst in the industrialized world. 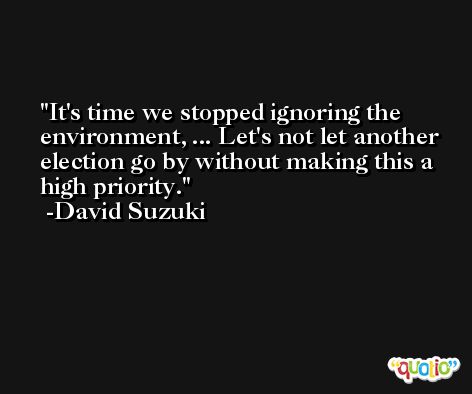 The question is whether we're going to start taking the steps now to avoid the really big jumps that are in store if we don't do something now.

In the environmental movement . . . every time you lose a battle it's for good, but our victories always seem to be temporary and we keep fighting them over and over again.