"David Nathaniel Spergel", is an United States/American theoretical astrophysics/theoretical astrophysicist and Princeton University professor (currently chair of the Department of Astrophysical Sciences) known for his work on the WMAP mission. Professor Spergel is a MacArthur Fellows Program/MacArthur Fellow. He has served as the chair of the Astrophysics Subcommittee of the NASA Advisory Council and was once the W.M. Keck distinguished visiting professor at the Institute for Advanced Study in Princeton, New Jersey. Not only has he focused on deciphering the data that the Microwave Anisotropy Probe (MAP) beams back from space, he was part of the team that dreamed up the mission and designed the satellite that would carry it out. Spergel is the Charles A Young Professor of Astronomy and a member of the United States National Academy of Sciences/National Academy of Sciences. He

shared the 2010 Shaw Prize in astronomy with Charles L. Bennett and Lyman Page/Lyman Alexander Page, Jr. for their work on WMAP (Wilkinson Microwave Anisotropy Probe). He shared the 2015 Dannie Heineman Prize with Marc Kamionkowski "for their outstanding contributions to the investigation of the fluctuations of the cosmic microwave background that have led to major breakthroughs in our understanding of the universe"

These results give strong evidence for the simple models proposed for the universe's early development. Inflation has passed one of its most significant tests.

We now know the thickness of the fog and can see what happened. 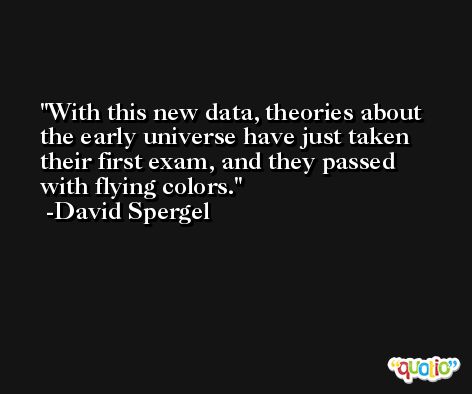 We have even more recent data than these three-year results, since the project has been running for four and a half years.